Opinion on Chuck Hagel–not all critics are extremists 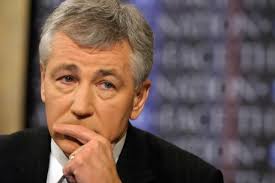 President Obama appears to be moving toward nominating former Nebraska senator Chuck Hagel as the new Secretary of Defense. Unfounded charges from the right link him to the fringy, false notion that President Obama does not support Israel.

The cries and whispers about Hagel — a moderate Republican — are not surprising. For a large segment of pundits and those who listen to them, moderation is not a good quality.

It is important to remember that diversity of opinion extends to Israel, where as in the United States, there are moderates and patriots who, while they may not support neo-conservative policies, are not traitors.

Case in point: Chemi Shalev and his opinion piece in the Jerusalem newspaper, Haaretz. Shalev has a nuanced opinion of Hagel, and does not endorse him, but says:

…whatever one’s objections to Hagel, one wonders what he has done to deserve the vile and venomous campaign of vilification that he has been subjected to in the past few days. From a widely respected former senator from Nebraska, known for his integrity and non-conformism, he has been turned virtually overnight into an inept, sadistic, gay-bashing anti-Israel appeaser who reeks of anti-Semitism. Unfortunately, some mainstream Jewish leaders have been dragged into this mud as well.

American Jews often talk about “what’s good for Israel.” Here’s a vote for moderation and democratic choice, not character assassination.