Posted on September 4, 2013 by Laurie Garrett 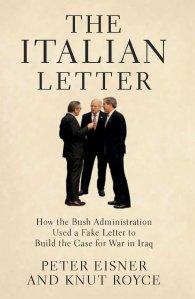 As Congress debates whether President Bashar al-Assad’s apparent use of sarin gas to kill some 1,400 fellow-Syrians merits retaliatory American military action, many are recalling the “weapons of mass destruction” rationale used to justify U.S. invasion of Iraq in 2003.
Though Secretary of State John Kerry has been at pains in recent days to underscore the caliber of intelligence supporting the Obama administration’s claims of Assad genocidal use of nerve gas, there is public doubt.
We’ve been here before, and Americans are weary not only of war, but also of con artists in positions of power.      Much of the language used to describe the Syrian situation is reminiscent of phrases and claims utilized by the George W. Bush administration to garner intervention backing from the United Nations Security Council, a long list of allies, and the United States Congress.

So it is inevitable that nine years later, amid chatter of U.S. cruise missile launches to take out Syrian government military stockpiles I should revisit the sorry history of Bush’s drumbeats of war.

The Italian Letter is my choice for a brilliantly researched, jaw-dropping book that ought to be on every politician’s reading list this week.  READ ENTIRE POST