Hillary and the World of the Possible

After several weird clown shows performed by the Republican right, the first Democratic debate gave people something to think about.

Specifically, with her fine-tuned performance, Hillary Clinton gave Bernie Sanders supporters much to mull over.

Clinton’s performance and her preparation, persona and demeanor were calculated with precision to appear presidential, to soften the negatives people see about her and to be ready to appeal to the left flank sufficiently while not being harsh with Sanders.

Clinton won the debate with skill. Good acting is best when you don’t seem to be acting. She made it look easy.

She handled Sanders skillfully when he spoke about democratic socialism and Denmark, and gently but forcefully reversed left to left alignment on Sanders’s stand on gun control. 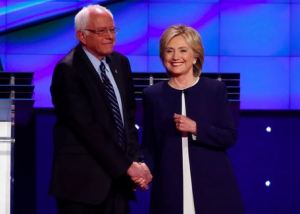 No one was great on foreign policy — Bernie was strange and stumbling about Syria and Putin. Hillary has no good answer, if anyone does, on the Middle East. [The other candidates don’t factor well–Jim Webb was self-referential and not convincing as the moderate right option; Martin O’Malley did not impress; and Lincoln Chaffee was oddly inconsequential]

More broadly, Bernie Sanders fit into an expected role.  He is a one-note samba about wealth in America and it is a tune we need to hear and deal with. He pulls Hillary in that direction. However, acknowledge it or not, Bernie Sanders is basically a tool of the Billary campaign to energize progressives who he will eventually then encourage to vote for her.

It was a strong evening for Hillary Clinton. She appeared to achieve a presence and persona that eliminates any other candidate–Biden, that is– from jumping in.

In short, Hillary Clinton re-introduced herself and restarted her campaign. She jumped over the media gabble against her. If the issue was email and Benghazi and trust, she turned the corner. That comes thanks to the bumbling admission by Kevin McCarthy, the failed Republican candidate for Speaker of the House, and Clinton’s ability to use that in her upcoming appearance before the politically venal House Benghazi committee. Sanders’s call to put an end to the email business took it off the table as a question, if it ever was, during the Democratic vetting of their potential candidates.
Many would agree that a country of 320 million people could have a better candidate and one who is not named Clinton. But Hillary Clinton was working to counteract that sentiment. She sought to coax the progressive coalition in her direction: listen to her repeated support for LGBT issues and mentioning, by the way, that America stands to follow the first African-American president with the first woman president. Combined with choosing — as one can imagine — Julian Castro as her running mate, Clinton took a giant step in the first debate on her march toward the presidency.

There is an implicit reminder, meanwhile, about Bernie Sanders’s electability. He did not do much to help his cause and he probably realizes where this is headed. He is not Ralph Nader, and Ralph Nader voters should take heed. Years after the 2000 election, Nader told me in an interview — after eight years of the Bush presidency — that the choice in 2000 between Bush and Gore was no choice. He was wrong.

2 responses to “Hillary and the World of the Possible”