James Joyce at the Archives (off politics)

Every time I write a book, I spend weeks at the National Archives in College Park, Maryland, searching for tracks and tidbits of information on the stories I’m pursuing. I never lose the awe of sorting through the documents, many mundane, all pieces of puzzles into another era. One of the great dangers — well, more like occupational hazards at the scale of library research — is that one can be drawn off on tangents that have nothing to do with the original matter at hand. Sorting through documents can become eye-wearying after a few hours at a clip.

A few years ago, I resolved to focus only on what I was looking for — documents in occupied France in 1940 and 1941 that gave hints to U.S. policy toward authorizing visas for people trying to escape the Nazis. Sorting through one box of letters filed in alphabetical order by name, I came across a letter under the “J’s” — a handwritten letter by James Joyce addressed to the U.S. Embassy at Vichy. “Interesting,” I thought, “I’ll have to get back to this.”

It took me two days to do a mental double-take —  I had just found and lost track of a letter written by James Joyce! Where was it again? I hadn’t written down the file reference.

With the pressures of other business, it took me a couple of years to tracking it down again. That’s the other pleasure about the National Archives — everything will always be there, waiting.  This past fall, I was prepared, even though I wasn’t sure how to find Joyce’s letter again. I brought along my friend, college roommate and frequent traveling companion, Miguel Pagliere — who happens also to be a professional photographer and a scholar on the works of James Joyce.

Miguel confirmed what I guessed, the letter is previously unknown and was written by James Joyce in 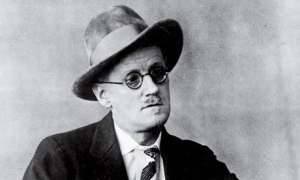 the fall of 1940. Joyce died less than three months later at the age of fifty-eight.

The letter is filed in an Embassy bound archive, cataloged among hundreds of consular letters. I found no index that would distinguish the famed author’s letter from other correspondence dealing with complex problems of law and civil issues in the midst of war.

Joyce, who was nearly blind at the end of his life, dated the letter October 25, 1940. It was addressed to a Mr. Cunningham, requesting assistance from the Vichy, France Embassy with arrangements to transport his daughter Lucia from a mental hospital near Nazi occupied Paris to a sanatorium in neutral Zurich, Switzerland. Additionally, he asked that two books that would be soon dropped off at the embassy by a friend be held for a few days until his son Giorgio could pick them up.

“I will be obliged if you will kindly keep these instead of forwarding them by post,” Joyce wrote, in a compressed script, using green ink on off-white woven paper. “My son will fetch them in due course in a few days.”

William S. Brockman, a specialist on James Joyce’s papers, agreed with Miguel that the letter had not been previously seen. “The Joyce letter is so far unknown,” Brockman said. “The green ink was typical of Joyce’s correspondence during his last years.” Joyce died shortly after arriving in Zurich on January 13, 1941, of  complications after surgery for a long undiagnosed ulcer.

The Joyce letter was accompanied by copies of telegrams that add context to the rapidly deteriorating events and desperate early years of World War II. Miguel theorized it was possible that shipping and selling annotated copies of his books would be a means of  transmitting funds from Random House, Joyce’s publisher in New York, to Joyce and his family. The Joyce family desperately needed money for their planned escape from St. Gerand-le Puy, a medieval town to the north of Vichy, in late December.  Joyce’s deteriorating health along with bureaucratic red tape to obtain exit visas would have contributed to their inability to leave France earlier.

The serendipitous discovery of the letter is now cataloged and duly noted. A copy will now be added to a three volume compilation of previously unpublished correspondence by Joyce. Oxford University Press has said it will begin publishing the correspondence later this year, along with a one-volume abridged version. Editors of the project are Brockman, Kevin J.H. Dettmar of Pomona College and Robert Spoo of the University of Tulsa.

My next visit to the Archives will include another search for a recovered document, which I neglected to track when I was looking for something else. It involves a once-secret report to intelligence officials from a prominent American journalist during World War Two, who I don’t think has ever been identified as serving two masters during the war. Stay tuned.