A Man in a High Castle

Season two of the alternate history series, The Man in The High Castle, has hit Amazon, and I will be watching.

The show, which debuted in 2016, posits a divided United States which lost World War II — following such events, it appears, as a nuclear attack on the homeland and invasions from East and West. America is then divided and shared uneasily by Imperial Japan — capital in a grey, subservient version of San Francisco — and The Reich, with its headquarters in New York, patrolled by the SS and spiffy American brownshirts. The two sides have established a buffer zone between them, a Wild West territory filled with conspirators, rebels and spies somewhere in the vicinity of Denver and the Rocky Mountains.

Nazi flags fly on Broadway and are festooned over the Statue of Liberty. In this version of reality, the High Castle is not a skyscraper on Fifth Avenue. Jews are in hiding if they are alive, people judged substandard, along with the Jews, are rounded up and killed. 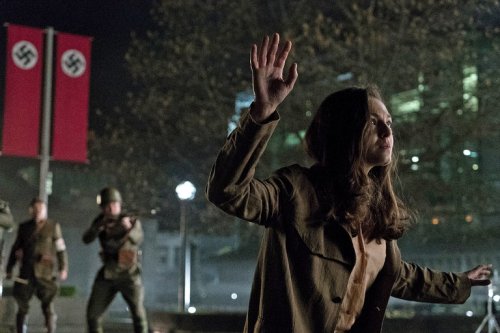 A review in the New York Times draws some unavoidable parallels with life these days:

“…it would be hyperbole to treat the series like a documentary, it would be denial to say it plays no differently now than it did before. …

The series producers say they did not intended to make a political statement.

“But you can’t wish the reminders away. A new “High Castle” story line involves a Japanese-American woman who survived the wartime internment camp at Manzanar, in California — one constant, it turns out, between its fictional timeline and ours. On Fox News shortly after the election, a supporter of Mr. Trump defended a proposal to register immigrants from Muslim countries by citing the actual camps as precedent.”

You get the idea. Last year, I asked myself, how easy is it for a country to fall passively into fascism?

This year, I look for clues in Season Two. Will the people of this nightmarish version of America fight for democracy and seek to oust the insanity?