Truths and Lies in the Senate

“I think if some people on this committee want to call the tragedy in Benghazi the worst since 9/11, it misunderstands the nature of 4,000 Americans plus lost over ten years of war in Iraq fought under false pretenses,” newly elected Sen. Chris Murphy (D-CT) said in response.

Under a Republican president, George W. Bush, the United States went to war using lies about U.S. intelligence information. To this hour, a number of Americans — perhaps the same number that voted Republican in the 2012 presidential election — think that President Bush invaded Iraq based on “the best available intelligence” at the time. That has been proven to be a lie, as I wrote with my colleague, Knut Royce, in the book, The Italian Letter. I also wrote about it in the Washington Post.

President Bush has not stood before the Senate to answer that serious charge. It is fairly certain that he never will.

Krauthammer: The Shrink of Romney-land

A friend of mine asked after the attacks in Libya and Egypt – and Mitt Romney’s mindless and mistimed and lying reaction – “is there any decorum left?”

In this strange divided land, there certainly isn’t.

The dividing lines among Democrats and Republicans are stark – have a look at the closed loop of talking heads. Consider Doctor Charles Krauthammer, the Fox television analyst and pundit and columnist (who happens to be a physician and psychiatrist), and witness the depths of self-delusion.

Rallying troops more ignorant than he himself, the doctor tells us today – predictably – that the attack on the U.S. embassy this week was the result of Obama policies. Doctor Krauthammer parrots Romney’s nonsense about “apologizing for America.”

“The substance of what Romney said at the time was absolutely right…The problem is he needs to make a larger argument. There is a collapse of Obama’s policy. It began with the Cairo speech, it began with the apologies to Iran. It began with regret for the Iraq war, it began with the so-called outreach and it completely collapsed. It has gotten nowhere on Iran. These are the fruits of appeasement and apology.”

The good doctor is not alone – the Romney spin masters have sent out Senator Rob Portman of Ohio; the former senator of Minnesota, Norm Coleman, Laura Ingraham and their ilk to spit bile, to lie and confuse.

Romney lied about events in the Middle East this week – by creating talking points untethered to reality. Is there decorum? Is there shame? No.
How can such bull permeate the airwaves?

American journalism bears some of the blame for the state of affairs. The rules of the game say that we must be balanced; newspapers and magazines report that “both sides” are exploiting events for their own political advantage. All would be well, but journalism doesn’t know how to place a flashing light under the visage of a liar. Newspapers publish lies and then place the fact-checking elsewhere in separate columns, even separate pages. There must be a better way.

The Republicans have been lying and deceiving and blocking legislation – hell-bent on taking power, waging war based on fraud and then taking power again — for at least a decade. With a more reliable front-man than Romney, some day too soon, a Reaganesque know-nothing smooth talker one day will win. Probably not this time, unless the Supreme Court-authorized multibillion dollar campaign spending spree works.

One always had the idea that a doctor, a psychiatrist, would be a healing force. That is why Doctor Krauthammer comes across as such strange apparition. The obvious thing to say is “doctor, heal thyself.” And then heal thy brethren.

Is democracy the official U.S. goal in the Middle East and around the world? Not necessarily. Not always, certainly not now. U.S presidents may talk about democratic

aspirations everywhere – but the record is a matter of relativity. (Remember the Shah of Iran, Chilean dictator Augusto Pinochet and the South African minority apartheid regime, to name a few cases.)

The U.S. conundrum, no matter how thoughtful and sincere the president of the moment, could hardly be worse than in the case of the Hashemite Kingdom of Jordan. (Saudi Arabia is a more complicated, different order of magnitude) What would the United States prefer: King Abdullah II and his pro-American constancy or the shaky possibilities of the ballot box? About one third of Jordan’s 6.5 million people are Palestinian refugees and most of them are Jordanian citizens. Open elections might move in an unscripted direction.

Historically, U.S. officials fear Palestinian voters going to the polls. In 2006, when Hamas won a majority in Palestinian parliamentary elections, it would have been hard to deny this was the people’s legitimate choice. Yet the Bush administration reacted with anger and halted financial aid to the Palestinian government – so did the European community. So much for democratic elections.

The United States has taken a couple of quick turns of policy in the recent popular uprisings around the Levant – Mubarak gone to seed, Yemen sinking fast, Libya bombing runs. But U.S. officials would be stuck if things turned very bad in Jordan. So far protests for political reform in Jordan have been rather mild.

King Abdullah has his American side. He is a graduate of the Deerfield Academy in Massachusetts and the Georgetown University School of Foreign Service. More than once, an attentive shopper might have bumped elbows with him on a on Saturday morning when Abdullah—jean-clad and unnoticed–browsed the bookshelves at Barnes and Noble in Georgetown.

The king is likely staying home for a while. He’s engaged in what he calls a “national dialogue,” which in some ways is more open, more prosperous than Arab neighbors.

The king, quoted by the Jordan information bureau, said this week that “We are moving ahead with the reform endeavor to build upon achievements, bring about development and realize Jordanians’ aspirations for a better future.”

Abdullah even insinuates he’s thinking about bigger changes. The Information Bureau also said this: “During a meeting with representatives of the professional associations, the King called for supporting all forms of constructive dialogue and standing firm against non-democratic moves that threaten the country’s national unity.”

The king would be a democrat, lower and probably upper case, if he took out U.S. citizenship. But in Jordan, it is likely that he will hold the prerogatives of the throne as long as he can–with steadfast support from the United States.

Libya: The Reality you won’t hear–yet.

It is possible to parse and figure out President Obama’s plan on Libya – as long as you’re not playing politics while analyzing the evidence. 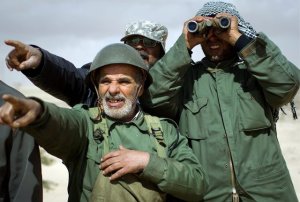 Don’t expect an open explanation of the strategy. What good is a public announcement from the battlements? Or a nationally broadcast speech? Make no mistake – the endgame is that someone – maybe not foreigners on the ground – ousts Gaddafi.

One week after the U.S.-organized attack on Gaddafi, rebels are no longer holed up and surrounded in Benghazi. No accident, and the reverse in fortune is not just the result of the no-fly zone. You can bet that American, British, French, even Italian intelligence operatives are the covert alliance in this story—providing support, training, tactical help – maybe even covert operatives – to rally the opposition to Gaddafi on the ground.

“Someone has gotten the rebels up off their haunches and headed back to the west.  Who that someone might be is, at this point, a bit of a mystery.  The passage of time will undoubtedly clarify that point.”

“Qathafi’s ‘forces’ are extremely brittle. They have already begun to run from air attacks or even the sound of aircraft, abandoning their equipment and supplies as they flee in civilian vehicles. It is not necessary to arm or supply the rebels. Qathafi’s disintegrating forces will provide the needed materiel as they withdraw.
“As the rebels approach Tripoli the populace will rise again. How long will all this take? As I have written elsewhere, an outside estimate of six months is reasonable. The actuality may be a considerably shorter departure date for Qathafi.”

It’s obvious. How does an amateur, amorphous, largely unknown Libyan rebel force suddenly start capturing territory and move into the oil-rich heartland of the country? With a little well-placed “encouragement.”

It wouldn’t also be surprising that Obama’s ardent detractors have gotten the word.

Listen to John McCain, who early on lashed out at the president when he held fire until a U.N.-backed coalition was in place. McCain would be happy to appeal to the tea-bagging set, but instead his message on Fox News over the weekend was effusive support:

“The fact is that Gadaffi said he’d go house to house and kill people, and thankfully at the 11th hour with the quote-unquote ‘no fly zone,’ we prevented that,” McCain said. “This is a moment of historic proportions, and this will give us a moment of opportunity to help with the spread of democracy.”

No doubt McCain, Boehner and others will have received the secret briefing: Western intelligence is engaged, helping the rebels, driving Gaddafi from office, sooner or later.

You may not hear about it on the talk shows, not yet. But stay tuned.

Half baked ideas on intervention in Libya

The misguided word among some on the fast-draw media circuit is that President Obama should be “DOING SOMETHING” about Libya. Give us a president, they say, who

can make a decision and get it done!

Criticism of the U.S. role in some quarters is based on the illusion that overt U.S. threats, followed by military might on air, sea and land always work. Critics would even mock the notion that President Obama is able to think on his own, and act with care. For them, military intervention is such a given, such a standby in the American bag of tricks that anything else seems weak.

They fail to explain to us how calling Gaddafi a maniac and launching quick military action would save lives.

The Obama administration has focused, as it must, on the safety of Americans in Libya. Moments after several hundred Americans – including diplomats from the U.S. embassy – left Tripoli by ferry and by airplane, the United States was freezing Libyan assets. Immediately, the administration started “ratcheting up” the pressure on Gaddafi, the Washington Post reported.

That sounds like a reasonable move, contrary to an editorial in the same newspaper, which complained about presidential inaction. The editorial page was rooting for immediate U.S. military action, the same editorial page that still fawns over the faulty, fraud-based Bush invasion of Iraq.

The U.S. image in the Middle East and elsewhere is improved somewhat; however, trust in America collapsed worldwide after the Bush administration set the precedent of preemptive war and lied about weapons of mass destruction in Iraq.

Unilateral U.S. action in Libya would be akin to what happens to local police when they respond to domestic disputes—both sides turn on the would-be peacemakers.

Neoconservatives venerate the mystical, vapid, Reaganesque Marlboro man image of American power. In 2011, concerted United Nations or regional action would be the preferred way to go in Libya, if it comes to that. President Obama, thankfully, doesn’t shoot from the hip.

By all scant news available, Libya is undergoing serious protests and disruptions, very little making its way into the news technosphere. There is some material on Youtube, such as this one from Al Jazeera

and reports from Human Rights Watch and Christian Science Monitor on protests, arrests, deaths and injuries.

This email was relayed by a reliable source overnight, with more detail than seen elsewhere and includes a plea for news coverage. A late check shows very little tweeting from and about Libya:

Juma Abdel majid, the brother of the head of the National front for the liberation
of the Tebu self immolated in the city of Kufra inside the offices of the Libyan Revolutionary
guards. He was protesting the taking of young school kids by the Rev
Guards in demonstrations for Qaddafi. He is at the hospital now. I have
confirmed this news with his brother Issa , who lives in Norway.